Harkness screens is delighted to announce that they have received the award for Technology Pioneer from not-for-profit independent trade organisation, Cinema Technology Community (CTC).

Receiving the award at the prestigious awards ceremony that took place in London, the awards ceremony was hosted by film-critic, author and broadcaster Mark Kermode. CTC’s Dave Norris, broadcaster Simon Mayo and composer David Arnold also handed out awards in front of over 150 industry professionals.

Recognising the individuals and organisations key to driving forward the movie-going experience through the continued development of technologies and their outstanding service to the industry.

“To be recognised for our pioneering development technology is a massive testament to the work that all of our employees do around the world.” CEO Mark Ashcroft said, “Naturally, we would like to thank CTC for this recognition and would like to emphasise our continued commitment to the development of even more cinema technologies.”

Team of the Year – BBFC

“At Harkness we have just celebrated our 90th Birthday and this award is a great way to celebrate our 90 years of innovation.” Technical Director David Harrison said after receiving the award on behalf of Harkness Screens.

“Innovation has been at the heart of everything that Harkness have done throughout our history. Whether that has been the use of washable fabrics to perforating PVC screens, we have maintained this core value and aim to be key innovators in the industry for years to come.”

The award recognises the innovation that Harkness Screens has prided itself on for much of its 90 years history. From the development of higher quality fabrics screens to the unique Tearseal technique used to hide the seams on PVC screens upon initial use of the material.

Proceeding to develop the first coated gain screen, Perlux, Harkness’ PVC screens became industry leaders in the late 1990s and early 2000s. Since then Harkness has gone on to develop the Digital Screen Modeller app to help projectionists optimise a location for projection.

Currently developing screen coatings for laser projection, what many industry leaders deem as the future of cinema technology, as well as continuing to maintain growth in Asia and in the USA, continuing their commitment to being technology pioneers in the cinema industry.

The citation for the award read:

“When one thinks of the term ‘heritage brands’ there are few in the industry who this more readily applies to. From humble beginnings as a family business, our inaugural technology pioneer has been a constant in the industry evolving its products to meet the changing cinema landscape.

From silent movies in smoked filled auditoriums through to the first spoken words in cinema, digital sound, digital projection, 3D and much more this company has been a constant innovator and leader.

Founded in 1929 by Scottish master draper Andrew Smith-Harkness and his son Tom, Harkness Screens became known for the manufacture of fabric screens for cinema.  Based out of the iconic Gate Studios in Borehamwood, the business quickly grew and by the early 1950s Harkness had already begun establishing itself as a recognisable brand across the world, so much so that during a brief period of its history, it was a part of the historic Rank Organisation during the same period as Odeon.

During the multiplex boom demand for Harkness’ now modern PVC screens had stretched across the world and in the early 2000’s the company entered a period of unprecedented growth during the 3D boom where it supplied more than 70% of all silver screens around the world.

Today, Harkness is a truly global technology company providing the highest quality screens with a 65% global market share.  The business also specialises in measurement devices, design tools and service with facilities in Europe, America and Asia.

In their 90th year, we’re delighted to award our first Technology Pioneer award to a British success story.  Please join us in welcoming David Harrison, CTO of Harkness Screens to the stage to collect the award.”

The first edition of the Technology Pioneer Award, Harkness was given the award for continued pioneering spirit over the course of 90 years. Added to this, the company’s 65% global market share, as well as the specialisation in measurement devices, design tools and services throughout the globe, Harkness was delighted to accept the award. 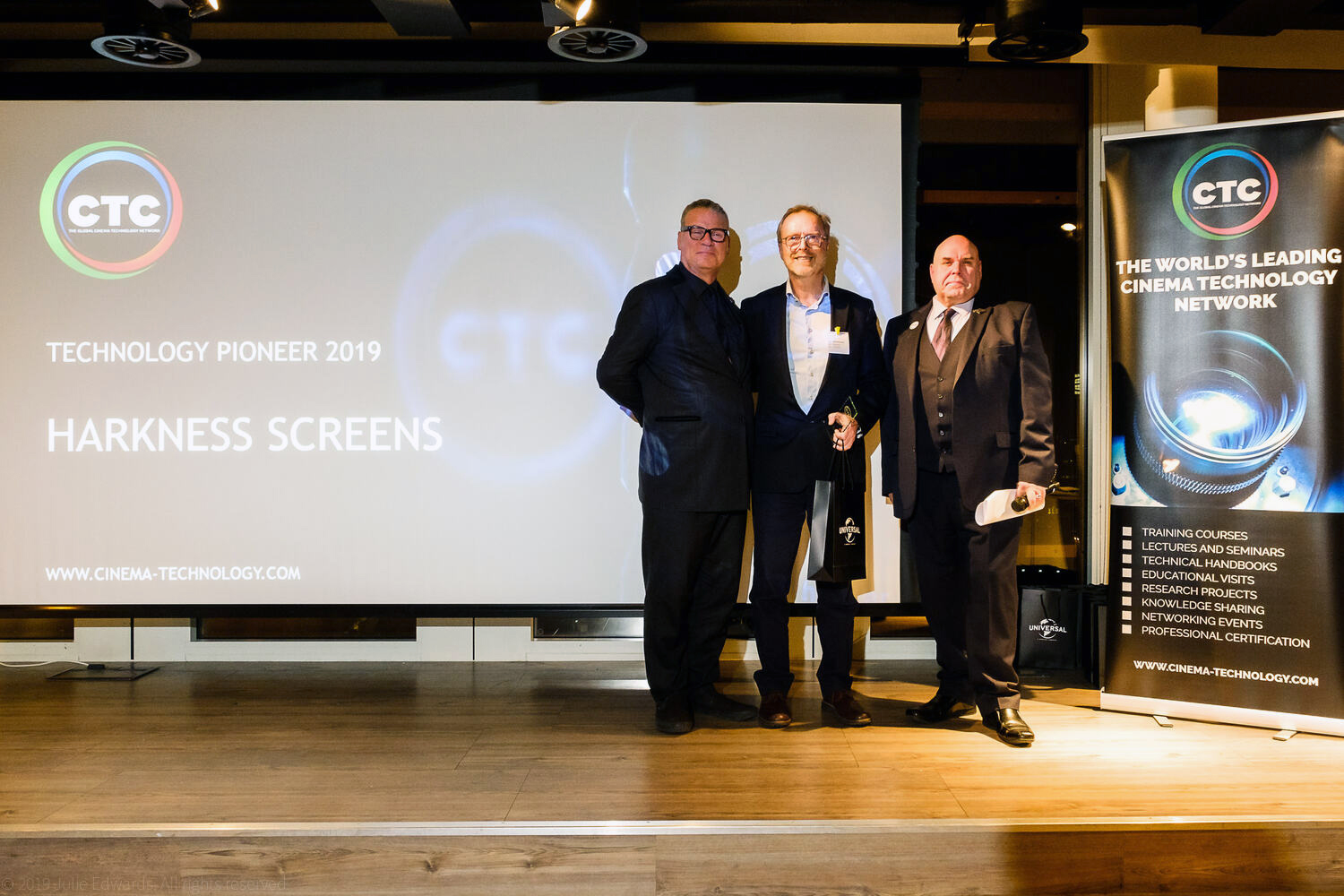