Harkness on the Road – MENA Dubai

Over a month ago Harkness Screens told the story of their involvement in Brazil for ExpoCine19. Two weeks Harkness attended the MENA Cinema Forum in Dubai, with SVP for New Business Tony Dilley and Andrew Emmott, Associate Director for Business Development.

It was the first time that Harkness had exhibited at the Middle East and North Africa Cinema Forum at just the second edition of the event. Taking place at the Conrad Dubai, most major film distributors and industry brands were represented.

“The MENA region is a key area for growth that we have targeted for the next few years, largely due to Saudi Arabia developing their cinema industry” Andrew Emmott said, “Fellow exhibitors like AMC, Vox Cinemas and Muvi have all announced exciting development plans and confirmed projects since the restrictions on cinema have been lifted.

“As a result, this makes Saudi Arabia arguably the most exciting country for cinema globally. The rest of the Middle Eastern region countries continue to be at the forefront of the cinema experience and are continuing their investment into creating a premium solution for customers.”

Gathering some 650 industry experts in its opening year, the three day expo was a roaring success in, leaving Harkness with little choice other than to exhibit this year. Alongside the likes of Novo, Reel Cinemas and Vox Cinemas, Emmott and Tony Dilley met with existing customers and potential new ones, as well as attending some of the panels that took place.

Attending the MENA Cinema Upcoming Projects and Cinema Technology and Innovation panels, Emmott was impressed by the panels that had representatives from Cinepolis, Vox, Muvi, Novo, AMC, Cinionic, Christie, Dolby, The Light Cinemas UK and NEC.

“It was great to hear that the leading technology companies are focussing on how the development in technology is key to driving the success of future cinema in the MENA region.

“Continuous technology development is the core value which Harkness built its 90 year reputation on and it is positive to see how this aligns with us and our future.” Emmott said.

Working alongside Senior Vice President for New Business Tony Dilley in Dubai, Dilley explained in further detail the business that Harkness already do in the Middle East and North Africa;

“Historically the MENA region has always been a good territory for Harkness. In the recent past, the Middle East specifically has been very strong, with the UAE, Bahrain, Oman, Qatar, Iraq and Kuwait all installing Harkness Screens.

“Now we have the Kingdom of Saudi Arabia opening up to cinema, suggesting they want 5000 screens by 2030. Exhibitors Empire, Muvi, AMC and Cinepolis are all building cinemas and are all Harkness customers.”

No screenings took place onsite at the Conrad Dubai, with screenings from Warner Bros., 20th Century Fox, Sony Pictures and MGM taking place at cinemas across the city, all of which using Harkness Screens.

Screening upcoming releases The Addams Family, Son-Mother and Zombieland: Double Tap, the latest installment of the Terminator franchise was premiered during the exhibition. Taking place at the Dolby Cinema in the Dubai Mall, Terminator: Dark Fate, was projected onto the Perlux HiWhite screen.

After attending MENA Dubai, Emmott will be representing Harkness at the Norwegian Cinema Conference before going to China to work alongside colleagues at the Beijing office. Taking place in Tromso, the conference will be a series of technical seminars attended by a variety of industry professionals and is also an opportunity for Harkness to meet with several regional customers. 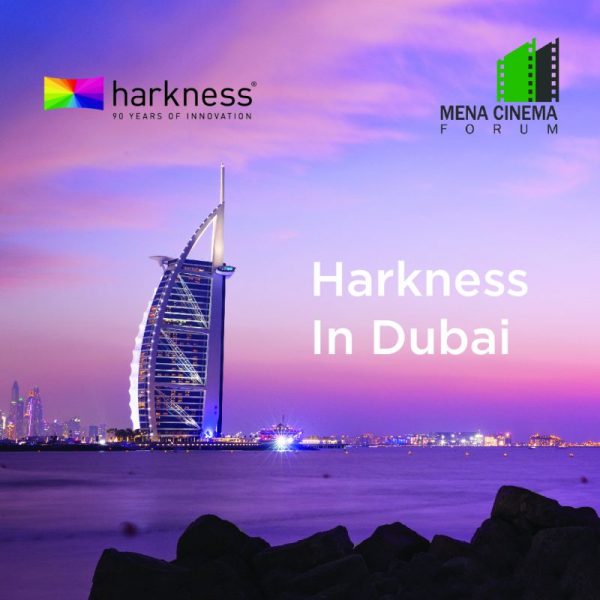